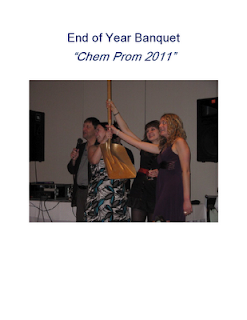 Chem Prom!
All students, staff and faculty, please join us for this year's Chem Prom end of year banquet, which is taking place at the Caboto Club on April 28, 2011. Tickets are still available!

Posted by University of Windsor - Chemistry and Biochemistry at 12:15 PM No comments:

Final presentations for Undergraduate Research in Chemistry and Biochemistry 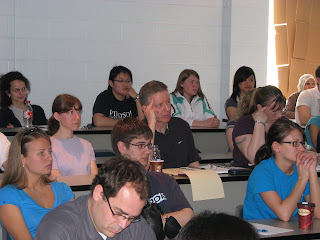 Please come join us and see the fantastic work that our students have done over the past year!
Posted by University of Windsor - Chemistry and Biochemistry at 12:09 PM No comments:

Chemist finds valuable use for gold in molecular analysis technique 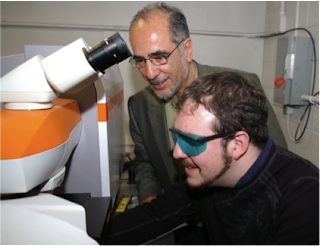 “All that glitters is not gold” is an oft-repeated adage cited throughout the ages to remind us that not everything that appears precious really is.~

For a scientist like Ricardo Aroca, the intrinsic value of real gold is not in its own brilliant luminescence – or the dollar value it can capture on the open market – but its infectious ability to make the molecules from other materials around it glitter so brightly he can capture an abundance of previously unknown information about them.

Dr. Aroca, an UWindsor chemistry professor who specializes in single molecule detection, has perfected a technique used to analyze the structure and behaviour of molecules called single molecule spectroscopy.

“Every single molecule gives off light,” he explained. “But by bringing gold nanostructures in close contact with them, you amplify their scattering and fluorescence, revealing more information about them.”

Using a state-of-the-art Raman laser microscope, Aroca and his students study the vibrational spectrum, which he refers to as the “fingerprints” of a molecule. Named after C.V. Raman, a Nobel Prize-winning Indian physicist, the microscope uses a high intensity laser to magnify and project the images of materials at the molecular level.

In an international journal called Angewandte Chemie, Aroca’s group recently reported that when tiny particles of gold are brought near the molecules they’re studying, those molecules become more excited and emit greater fluorescence. Capturing that fluorescence, means greater understanding about the molecular structure of a vast variety of materials, crucial knowledge for applications in biomedicine, chemical detection and sensor technology.

It may seem like obscure science, but it’s caught the attention of colleagues around the world. In fact, two papers he authored on the subject were recently included on the Top 10 list of most-cited papers in that field over the last year, according to the BioMedLib, a search engine that monitors biomedical literature.

“We’ve had fairly good recognition internationally on this subject,” he said.

Aroca said thanks to the technique, scientists can amass large databases of information on the molecular properties of materials that can be made available to scientists developing pharmaceuticals or building sensors that can detect trace elements of carcinogens in biological organisms.

“The technique is general, but you can develop many specific applications,” he said.

Posted by University of Windsor - Chemistry and Biochemistry at 3:25 PM No comments: