BioART CAMP to bring science and art together in Rocky Mountains 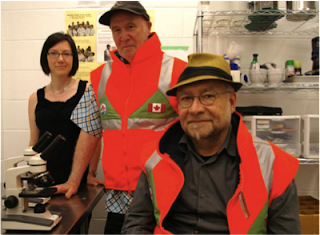 One is a biochemist who specializes in cell biology, vascular systems and blood platelet function. The other is an experimental artist who helped pioneer the conceptual art movement in Canada. They have a lot more in common than you might think.

Bulent Mutus, a professor in biochemistry, and professor emeritus Iain Baxter&, who’s been dubbed "the Marshall McLuhan of visual art," will both participate as leaders in a two-week BioARTCAMP, an art and science fair that begins on July 19 in Banff, Alberta. Dr. Mutus will be the senior scientist at the event and Baxter& will be the senior artist.

Jennifer Willet, a visual art professor and the mind behind the camp’s concept, said the event will bring together about 20 artists, scientists, theorists, filmmakers and students to build a portable lab and field research station that will demonstrate that art and the sciences are more alike than most people traditionally assume.

“We’re just going to put a whole bunch of artists and scientists together and see what comes out,” said Dr. Willet. “Art teaches people to construct meaning through representation and that’s what scientists do too, whether they realize it or not.”

Mutus, who likes to dabble in painting and photography in his spare time, agreed. He noted that when he’s conducting lab experiments he’s always thinking about how the data will appear visually.

“Science is all about how you present information,” he said. “Whether you know it or not, you use art almost daily in science.”

Besides helping construct the lab and assisting other artist and scientists with their projects, Mutus will work on a piece that uses silver nitrate filter paper, which operates as a sensor to detect hydrogen sulfide, a potentially dangerous gas. When the paper detects H2S, it leaves dark impressions that could be worked into artistic drawings or other pieces. He’ll set up an installation to do just that.

Meanwhile, Baxter& will spend his time stomping through the woods of his youth with a mannequin, photographing it in various settings in an attempt to conceptualize both the distances and connections between humanity and nature.

“Science and art both involve a great deal of technical dexterity and craftsmanship,” said Baxter&, who studied zoology before devoting his life to his art. “They’re both really conceptual. The whole idea of creating something artistic mimics experimental methodology.”
Willet said there will be two opportunities for members of the public to participate in the camp and view the work. She also suggested the camp may turn into an annual event.

Posted by University of Windsor - Chemistry and Biochemistry at 3:29 PM No comments: